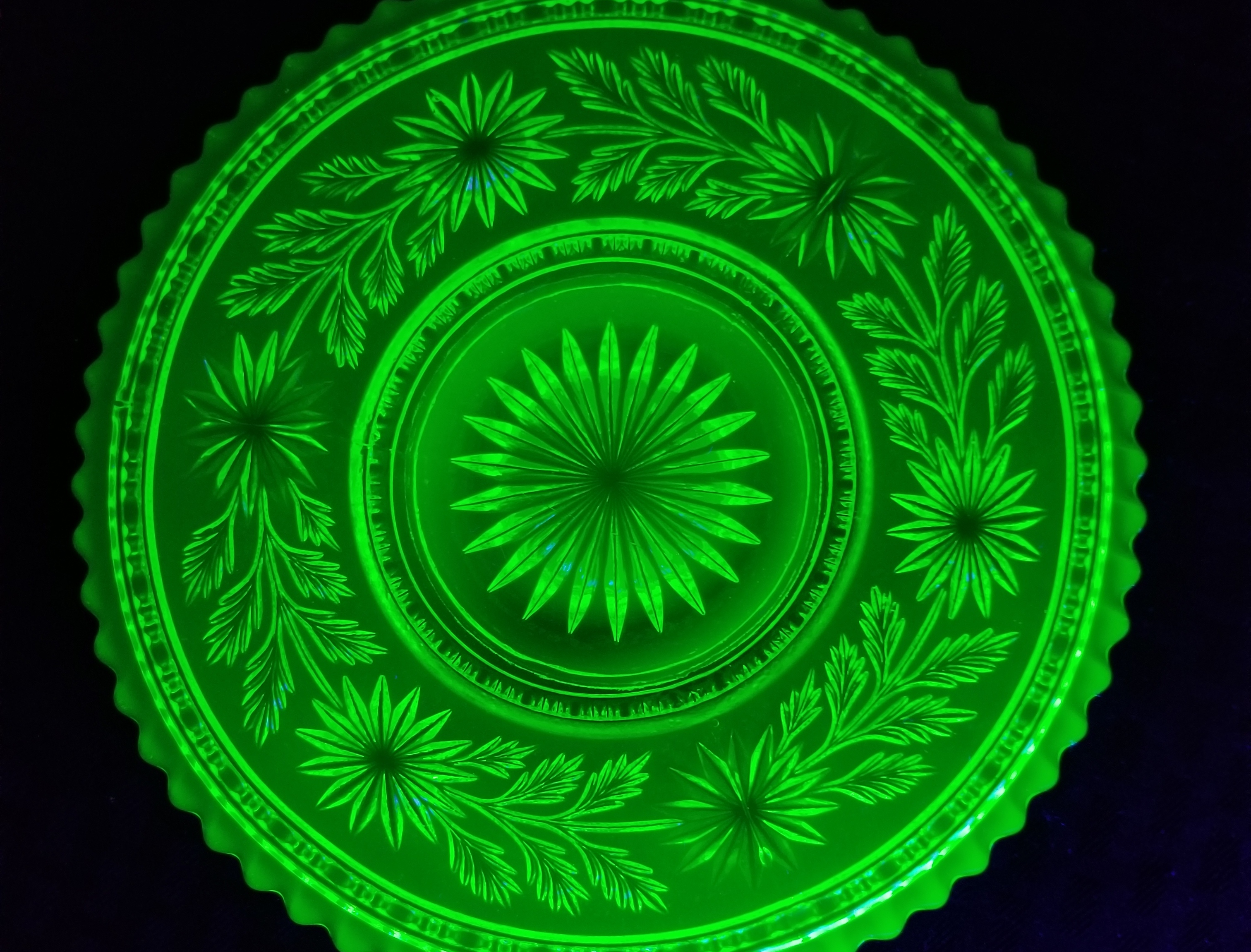 How do I make it glow?

All you need is a blacklight. If you’re not setting up a prominent display for it, and you only want to show off the glow sometimes, I recommend buying this cheap flashlight from Amazon. It’s what I carry around when I go antiquing (link)

Is this safe to use?

Generally yes. Treat it as you would any other leaded glass, in that it can be considered relatively safe for occasional use, with the exception of acids. Acidic foods like citrus tend to leach out the uranium (as well as lead, which some of these pieces probably contain as well), so using U glass with lemons, limes, oranges, or similar is never recommended.

If you want to store solid food in U glass for the medium-to-long term, consider using a doily.

Will the uranium make my food radioactive?

No. The radiation given off from the uranium will not make your food radioactive.

In fact, the only way to make something radioactive is by hitting it with neutrons. Neutrons do not come off of uranium.

The only thing uranium could do is kill off a very small amount of bacteria, similar to how food irradiation kills off bacteria on things like strawberries

Why does uranium glass glow?

A common misconception is that the UV fluorescence of uranium glass is caused by the radioactive properties of uranium. In fact, it is simply a chemical property of the uranium that causes this feature

Is Uranium glass the same is Vaseline?

Yes, although the term Vaseline is sometimes used to referred to glass with a similar color that does not contain Uranium.

Each piece must be tested by checking the UV fluorescence or using a radiation detector such as a Geiger counter to confirm that it contains Uranium.

How radioactive are these pieces? What is the count rate coming off of them?

I do not make official count measurements on any of my glass pieces. If you are really serious about finding this information out, let me know and I can potentially connect you with people who could help you obtain this information

Where do you buy these pieces?

I go antiquing at dozens of stores in many different states. Some of the states I have pieces from include Colorado, Utah, Idaho, Wyoming, South Dakota, Minnesota, and Wisconsin. There are many common pieces that you can find at at almost every antique shop, like sherbet glasses.

How do you set your Etsy prices?

I buy all of these pieces from antique shops around the US, so I start with the price that I paid at the store. Then I add a small percentage to cover the cost of the shipping material and my time.